Have a header photo that is actually a screenshot from a video and is a little bit blurry but it’s the only close up shot I’ve got of my make-up from my prom night.

Prom was amazing! It was an amazing night and I felt so happy and I made a video getting ready for prom which you can watch here!

I started off with trying to paint my nails for approximately two hours and it was still questionably painted but, to be honest, no one could have noticed nor cared that much. But this is when my sister got home and started doing my make-up for me!

She’s a very, very talented and knowledgeable make-up artist with absolutely zero official training at all, but still managed to give me a beautiful smoky eye and dark lip look and it looked great, I was so happy.

Then my mum did my hair and I was thinking of a sort of wrap around half-up plait thing and she put the plaits in my hair and we decided that, actually, this is the kind of Lord of the Rings elf, fairy-ish look I wanted! 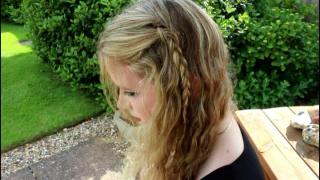 Also I love how my highlights look really cool with my hair like this, it was fun I love it.

I think this is the closest I got to a whole outfit shot at home. How pretentious.

This is when the parents went a bit photo crazy.

That gorgeous sister I have.

On nights like this, mum goes mental with taking photos and whatnot so she must have loads on her phone that she has not sent to me, I’ll add them if they’re any good.

After being picked up by a stunning looking Katy, we went to our friend Hollie’s for a little pre-prom Presecco and yet more photos.

I don’t know why I like this photo so much but it’s just me and two or my best friends just casually chatting and we look so grown up and I’ve known Katy since I was six years old, me and Hollie went to Africa together for a month – I’ve been through a lot with those girls and I’m really grateful to still have them in my life. 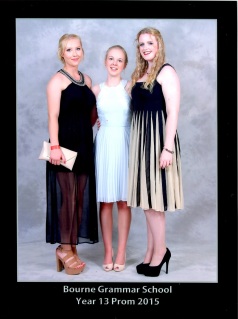 Welshy and Hol-Mart, my faves. Also my heels, my other faves.

Louise has been one of my best friends for, like, five years and I adore her with everything.

Katy is a beautiful human being, here’s to another 12 years of friendship!

This is my favourite ever teacher, Mrs Paul, who told me that she thought in ten years I’d be a writer with a blog on the side and those words have made me happy ever since. I love Mrs Paul.

The reappearance of Hol-Mart and Welshy. We’re like a really weird kids TV show trio – Welshy, Hol-Mart and Soapy. We should be superheroes.

Dinner was kind of pretentious, but generally really good considering I’m not at all used to posh fancy good. The best part was probably the mash potato and I stand by the fact potato is probably my favourite food ever.

I wont an award – I thought if I won anything it would be ‘most likely to write a book’ because, y’know, I have written a book, but I won ‘most likely to have a hit record’.

Apparently people know about and watch and maybe even like my covers on YouTube (playlist here, if you’re interested!). The fact that people watch my videos at all blows my mind but people I know, that I went to school with actually watch my face on YouTube? I can’t comprehend that people have seen me talk about really personal things and have heard me sing even though I don’t know if I could ever sing in public. It’s blowing my mind just thinking about actually having an effect on these people that I’ve been to school with for seven years. I can’t think about it anymore!

But obviously I could have just gone and got my award like a normal person. Most of the awards had a male and a female winner and from what I can tell, if there was an overwhelming winner on one side, there was only one winner as some categories only had a male or a female winner. This category had two winners and the male winner was announced first, so when I heard someone saying ‘Sophie’ I just assumed it was someone else from a different table talking to one of the many Sophie’s in my year so I just ignored it – I hadn’t even considered that I could have won anything.

So after the awards, there was what I’m calling ‘The Fish Bowl Prizes’ because I didn’t really have a clue what was going on and one of the teachers picked out a name, someone got to pick a prize and then they picked out the next name until the prizes ran out. Again, never would have expected my name to be called so I went up, picked an iTunes voucher, picked the next name and sat back down. I was very confused when I got a laminated certificate as well and it took me an embarrassingly long time to figure out that I’d won something and I’m too deaf to actually hear my own name. 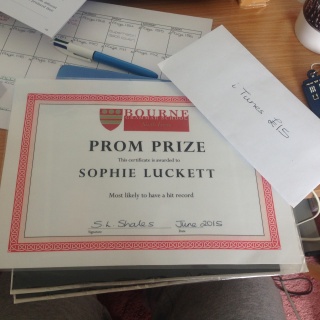 Brilliant last impression for me to leave on my year, right?

After the awards, the music went on and the dancing started and all the good chart songs were playing with all the nostalgic 90s songs and pop-rock and a Grease medley at the end of the night. I dance a lot when I’m drunk, but I don’t need to be drunk to dance. I had one malibu and coke but the drinks were so expensive and I was really happy and having a really great time anyways, so I didn’t feel I needed to drink to enjoy it more. So I had a great night and I saved money and I wasn’t hungover the next morning, winners all round.

I don’t know if anyone from school reads this blog, but if they do I want to say thank you for a two years, seven years, even fourteen years in some cases, thank you for an amazing prom and good luck for the future.

For everyone else, thank you for reading,