‘Bucket’ list might not have been the best phrase, because I’m optimistic about not having to fit all these things in before I ‘kick the bucket’ but you get the principle – I made a (very colourful and pretty) list of things to do while we’re in lockdown.

I’ll be honest, this whole coronavirus thing is starting to weigh me down a little bit – at the beginning it was alright, I had extra time to catch up on things and my boyfriend has been home for the longest time since he started work because he’s been furloughed, all my pressing uni deadlines were pushed back and Disney+ had just been released.

Now, it’s all sinking in that this is going to be our new normal for the considerable and not knowing when it will end is the bit that’s really getting to me. There’s so many ‘we’ll just see what happens’ and ‘when this all ends’ especially in communications about my masters, there’s talk of our dissertation being pushed back which would mean my course might not finish in September as it was intended to and I don’t know when I’ll be able to start full time work. And don’t get me started on how terrified I am about re-entering the graduate job market and feeling like I’m just going to spend a year unemployed again.

But all that aside! I was coming up with lots of ideas of things I could do to make the most of having extra time at home and I worried that I’d start forgetting them, so I grabbed a piece of paper from the printer and my coloured pens and I started writing them all down!

I thought I’d share them in a blog post because I’ve seen a few of these kinds of posts floating around and I always love nosying about what everyone’s planning to do and my list isn’t super ‘productive’ per say – it’s mostly creative things that I don’t normally get time to do so if you’re looking for some crafty-ish inspiration, here’s what I’m hoping to work on when (if) my uni work lightens up a bit!

– work on t-shirt blanket – I’m a super sentimental person who used to have a massive t-shirt collection so I’ve been collecting and cutting up t-shirts for a couple of years (though some of the t-shirts are 10+ years old) and this year I finally started sticking it all together. I’m at the point where I’ve finished the first side and I want to embellish it more – using some embroidery thread to secure some of the shirts down, sewing on some patches and some lanyards I don’t use anymore and full ‘finishing’ the first side before I start with the rest of the cutouts on the other side. I’ve already made a good dent in this project but I’ll need some serious patience and free time to start sewing on something so bulky! 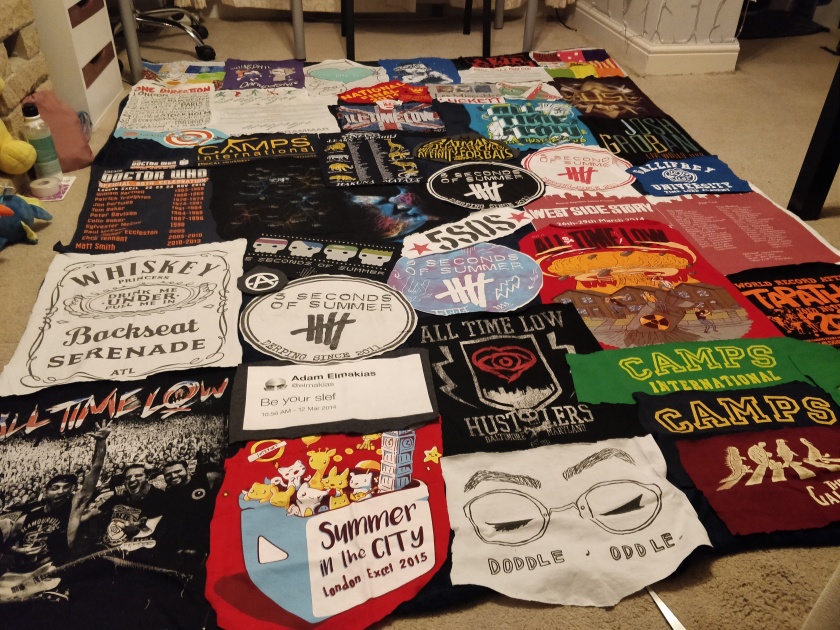 – catch up with scrapbook and photo album – I’ve actually done this one! I had a moderate pile of stuff for my scrapbook and a huge pile of photos that took me two days to finish sticking in and captioning, but that’s all caught up so big tick there!

– start elephant cross stitch – I bought one of those cross stitch kits from hobbycraft a couple of months ago but haven’t made time to start it. I’m thinking as it gets a bit warmer and the six squares of patio outside our front door get a bit more sunlight (and uni work dies down a bit…) I can make the most of having some creative, relaxing and relatively simple to do. Though if I really enjoy it I’m going to have to head onto amazon and buy some more…

– try new recipes* (*if they have the ingredients at the shop) – so far the closest I’ve got is playing ‘Ready Steady Cook’ with the contents of the fridge but it’s been fun to have more time to cook but also to just shove something frozen in the oven sometimes too. If you have any yummy recipe suggestions please do let me know!!

– use film/DSLR cameras – I used up all the film in my film camera pretty quickly and seeing as I can’t go get it developed anywhere, I’m not in a rush to put my next roll in. Though I’m planning to use my DSLR camera a bit more this week around the house and if I can actually get some decent photos maybe I can justify buying a better camera (with what money lol).

– start a new blog or YouTube series – this one I have actually set the wheels in motion! My mum came up with the idea that we should start writing children’s stories and making little videos on YouTube that we can send to my godmother’s kids. I think we’re both kind of hoping we can go viral or something but also we’re just going to have fun writing stories and making videos from 100 miles apart! I also have an idea for a new blog series but I’m going to keep it to myself for now!

– try some new at home workouts – HIIT/yoga/zumba – with so many creators and fitness companies doing live workouts and free months on apps, now is the prime time to get into a new fitness routine. But when you have a living room that can just about fit a yoga mat in if you move the coffee table (I don’t even have a yoga mat) and no garden (we technically have a little patio area but the neighbour’s garden is right next to it and I’m not here for concrete workouts) there’s a limit to what you can do! I’ve done a couple of Joe Wicks live workouts, I’ve tried a few yoga videos and I’d love to do a live dance class but with a boyfriend in a small hour and nowhere he can really go (and not wanting to do the class with him in the room…) I don’t think it’s an option. But I’m going to try a stretch workout from the Nike training app and I might try and get back into Couch to 5k if we’re still allowed to go out and exercise but it’s not a priority for me right now. I’ve managed three weeks of exercising twice a week and I’m pretty proud of myself!

– sort through stuff in alcove – another tick! The alcove is what I call my little cupboard in the bedroom where my dressing table and some of my personal belongings are. I went through all the shelves and sorted them all properly, put some stuff out for the charity shops and it feels so much neater and tidier now.

– keep up with uni work (develop and refine skills) – this one isn’t so much a goal as much as a necessity, but I’m hoping to use this time to really do the best I can on the assignments I have. Most of my assignments have been modified and they’re not the way any of us really wanted to finish this course but I’ve got a big calendar, I’ve planned out tasks to do most days (every day is a lot to ask) and although today I’m not feeling particularly motivated, even just doing a little bit means less to do next time I do some work, so trying to keep that in mind!

This time isn’t easy for anyone – I know I’m in an incredibly fortunate position to still have income, to not have too much to do and to have the luxury of making a ‘time filling’ list at all, but that doesn’t mean it’s not very scary times to be living in.

I hope you and your loved ones are happy and healthy!

Thank you so much for reading,