When I first started blogging, my three topics of choice were lifestyle, music and travel and I really did not show that in what I was writing. I’ve made it a little personal goal of mine to write genuinely relevant travel content this year, not ‘I wish I could travel here’ and ‘one day I’ll go to these places’ but stuff that genuinely reflects where I am in terms of travel at the moment.

Long story short, my boyfriend and I have had a trip to Paris in the works since last January (yes, I mean 2018, 13 months ago) and after mishaps getting my boyfriend’s first passport, spontaneously buying EuroStar tickets in November because they were so cheap (£29 per person each way, £116 total – utter bargain, keep an eye on trainline because it’s so worth it in what you save!) and everything else – we’re going to Paris for 3 nights at the end of March.

Slowly I’ve been ticking off the things I need to do – this week I’m going to book a hotel (because gal’s gotta save) and for my boy’s birthday (one whole year after declaring I would take him to Paris in the first place) I wrote up a kind of mock itinerary and sure, he can scrap it and write a whole new one if he likes but wow, I put so much time into it. 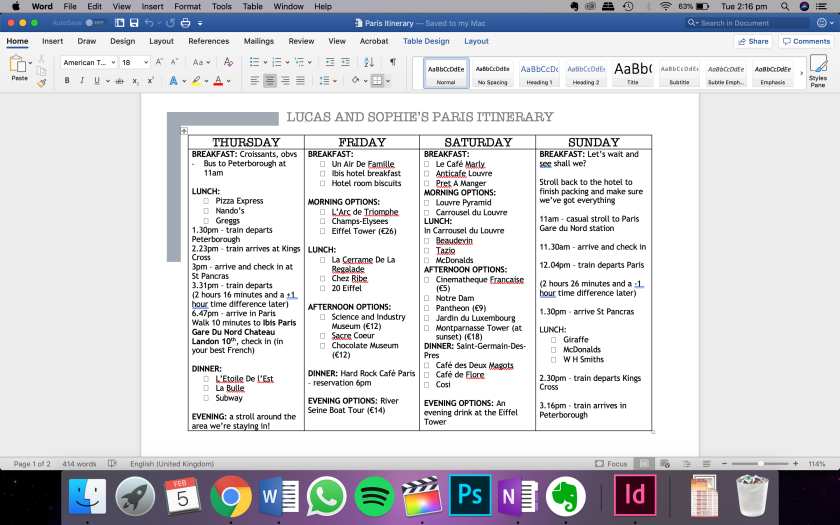 (let’s pretend this screenshot of my laptop screen is edgy and creative and not just a bit weird or lazy, I was aiming for edgy okay)

So I’m going to have a little chat about how I made this itinerary – I got a bit hung up on hotels and stuff but a few people on Instagram said not to worry about finding somewhere too fancy because for our first trip to Paris we should spend as much time as we can in the city and where we stay is just somewhere to sleep. So at present I’m hoping to book this ibis hotel which is near the Gare du Nord train station where we’ll be getting the Eurostar too but a couple of people have told me to have a look on AirBNB as well but I’m kind of skeptical and it scares me a bit so if anyone has any AirBNB advice or where to stay in Paris recommendations please do let me know, probably on Instagram is easiest! Or a comment, whatever floats your boat.

But back to my itinerary! I put a lot of research into this but I also made the most of instagram by blocking my boyfriend from seeing my stories (it was a birthday present surprise, I was trying to be subtle!) and asking for recommendations and writing down everything that people had suggested.

And then, like the basic bitch I am, I googled ‘things to do in Paris’ – but more specifically, my sister recommended getting the Paris pass which gets free access to a bunch of attractions. I haven’t bought this (I’ll explain that in a second) but there is a free 120 page guide to the city that I downloaded and scrolled through and made notes of the things I thought Lucas (the boy) and I would be most interested in doing.

From there, I condensed the list to things I actually thought we would do and then I used Google Maps to be able to visually see where all these attractions were to try and group the things that are in similar areas and plan out our days a little bit. Most of Thursday and Sunday are taken by travel but there’s still two full days that we can fit in as much as we can! 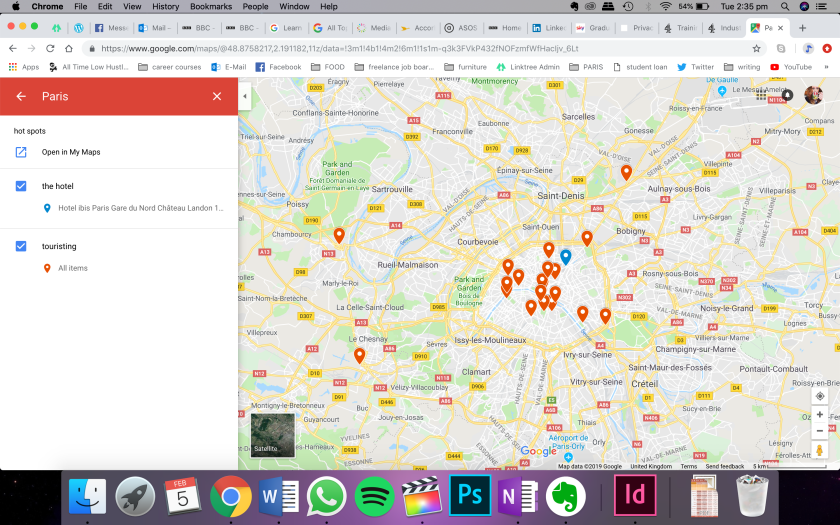 When I grouped things I was looking for morning activities, afternoon activities and maybe one evening thing so there’s time for lots of things! Once I could see them all on the map there was a few things that I ruled out because they were so isolated but I grouped things and popped them on the itinerary.

From there I did a little more research into each potential thing and how much tickets or anything would cost and included that and I could also look around each area we’re in for breakfast/lunch/dinner and list a few options. Finding places to eat in advance I really struggled with – I think we’ll mostly just have a look at what’s around us when we’re ready for food and go where’s convenient and looks good but the one thing I have booked is Hard Rock Cafe Paris because I want to make sure we can get a table on Friday night. I’m so excited about it, ever since I went to Hard Rock Cafe in New York I’ve wanted to try as many as possible and I can’t wait.

I’m very aware that we’re not going to follow this itinerary to the letter (other than trains, we can’t miss those) and I’m so happy to go with the flow but I didn’t want to go into this trip with absolutely no plans because I definitely would have missed something amazing.

So that’s how I made our little itinerary and that’s our plans for Paris so far! I definitely want to have another look and potentially book a few bits in advance but I won’t be buying the aforementioned Paris Pass for a few reasons that I want to be explicit about – firstly, I think it’s incredibly expensive. If you’re going to do everything in the guide, then I’m sure it’s worth the money but for a two-full-days-in-city trip it is almost certainly going to be a waste of money. Secondly, developing on that – doing a quick price up of each activity that costs money that I think we’ll be doing and it costs less to buy them all individually than to buy the pass. Thirdly, I think it’s a bit gimmicky – being a tourist doesn’t have to cost that much money and if I wanted to I could definitely do this whole trip without paying for attractions or activities. The website sucks you in with ‘you’ll waste so much money if you don’t buy this pass!’ but when you add it up, it’s just not the case.

If there’s any recommendations or questions about Paris please do leave them in the comments! Although I’ve been on a few amazing trips, I’m still very new to travelling and being entirely responsible for everything we do so all tips and recommendations are welcome!

Thank you so much for reading,