Like every other student in the country, if not the world, the second independence was thrust into my naive hands I went mental with spending and it was quickly highlighted that I’m not very good with money. Resisting the temptation to spend all that free money in my overdraft, believing at all that my overdraft was ‘free money’ and then reaching the horrible point last summer that I was so close to the end I was really struggling really hit home that I needed to make some changes.

I’m also an organisational freak and I wanted to be in control of my financial stability, so almost a year of struggling with nearly nothing later, I’ve nearly got a handle on it.

I made a plan – a lot of lists and a lot of colours involved, but I made a plan so I could really figure out what was going on and put some dates and real figures on paper, rather than just plucking numbers from the air and guessing when I might be out of my overdraft.

After my student loan came in at the end of April, I knew I needed to make a more solid plan and actually decide how I was going to spend my money and when. So I decided to spend all of my loan instalment in one go on the last of the rent for my flat, the last of the deposit for the house I’m moving into in the summer and paying three months of rent on the house in one go (so I don’t owe anymore rent until the end of September when the next instalment of loan comes in).

And that was loan gone, but probably in the most sensible way I could of used it all, right?

Then April pay day rolled around – I used some of that to pay off the last of the money I owed my mum (for rent payments I couldn’t afford and a deposit I didn’t have money for, felt nice to get that finally paid off!) and from there I decided I would spend nothing except on food shopping and my two monthly direct debits (for Adobe Creative Cloud and Spotify) because I really want to get out of my overdraft.

I’ve been close to hitting the end of my overdraft too many times and last summer was a real, real strain when I was trying to pay my mum back what I owed her and supporting my unemployed boyfriend at the time, but this year is set to be very different. I’m already nearly halfway out of it and I have a plan.

My three points that I wanted to hit in this no spend month were:

And how well did that go? Not as bad as I thought. 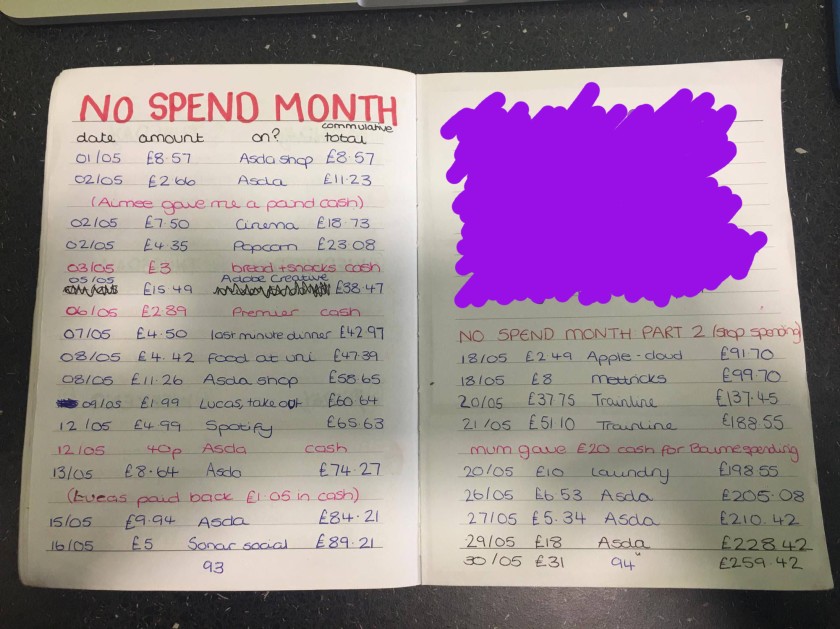 Update: after this photo was taken I spent £6.50 in Tiger but it was a gift for my mum and some glow in the dark space stickers so, money well spent really.

There was a couple of expensive Asda shops, I went to see Guardians of the Galaxy 2 in the cinema at the beginning of the month (which I ended up counting as my £20 reward)  and a couple of social things (but no pub) and I did okay.

There are a couple of things I feel the need to justify – the trainline purchases: I nearly had to spend over £70 just to go home and see my family so I bought the cheaper £50 ticket and looked ahead to my next trip home and saw I could get the tickets for £37 so didn’t want to miss out on this and bought them in advance, so that’ll be something I don’t have to buy in June.

Then that last £31 Asda shop – I intended to treat myself a little bit in making a homemade chocolate fondue with fruit and snacks and deliciousness but then, I saw Asda were doing a 3 for 2 sale on a lot of hygiene products, so I bought three packets of tampons, a new toothbrush, some toothpaste and a face scrub for my boyfriend which came to a total of about £15 and about half of the shop, but it will save me money in the long run, so I’m trying not to feel too guilty about it. I also stocked up on Ribena while it was on rollback and bought some ice cream that I’m going to mix into smoothies too.

So that last shop of the month didn’t do much for ‘no spending’ but it will save me money in the long run. I felt very sad and guilty about it, if it helps.

On this last day in May and looking ahead to June, I’m going to try and have another ‘no spend’ month which should get me out of if not close to the end of my overdraft, then July I’ll probably be a bit more lenient but by August and September I should be stable. I’m so excited to be in positive and to be able to go into the bank and say I want to close my overdraft.

When I actually sat down and planned at the end of April, I realised that I could get back into the positives by the end of June. But obviously plans change – I spent more than I was anticipating this month and I also got more hours and pay from work, so the end of June might still be my ‘date’ but I’m not going to freak out if it’s not.

I am really proud of myself for how this month has gone – sure, I spent a total of over £250 but it just makes me think about how much I would have spent if I wasn’t being conscious of my spending and it makes me wonder how much my friends and other people at uni spent in May. It’s an interesting decision to make.

My main tips would be:

So point 5 is why I want to close my overdraft – I can’t resist when I see that there’s £1500 that I’m not meant to touch in my account and I’m getting out of it.