Last night I saw Busted on their Night Driver 2017 tour in Portsmouth and it was amazing – I’ve been a fan of Busted since their first album in 2002, when I was just six years old and being able to see them reunited again fifteen years later just feels quite monumental to me.

Start of the night took a few points away from Portsmouth Guildhall – they confiscated my camera because it was ‘on a selfie stick’ (I have a tiny tripod attached to it) and it had a detachable lens so clearly it was too professional. I was not a happy bunny.

But when the concert started it all got a bit better – Busted’s support, Natives, were a brilliant choice of opening act – they were upbeat and engaging with Imagine Dragons vibes, vibrant patterned shirts and so many different drums and rhythms – they really got the audience going without assuming we knew who they were, which is often the problem with support acts I find.

Watching the crew set up for Busted was really interesting – this is the first time I’d been to a gig with a bunch of techies, the three boys I was with all study TV and audio and all intend to (or at least, very much enjoy) working in live music so they were chatting all about the speakers and the lights and the way the levels of the music was being played (there was talk of EQ being too high?) and it was all just very interesting. I’m not clever enough to do what they do but it’s still the ultimate dream to work on a tour with one of my favourite bands, whether that be social media, YouTube or some sort of journalism related job, I just feel it’s my calling.

On a more tour related note, the set for this tour was astonishing – there were six pillars of lights and the way they were used to emphasise the mood and impact of the songs was really effective. The light show was one of the most astonishing and impressive parts of the show for sure (outside the music, of course).

Now for the music, I have to talk about the keyboard/synth/percussion set up each band member had – James just had a piano, Charlie had a piano and a synth keyboard and a tambourine and I think Matt had a piano and a synth pad but I couldn’t see him too well. By ‘piano’ I mean keyboard but they all had custom designed keyboard to fit with the set and they were gorgeous. It really showed they’d put a lot of thought and effort into making it as much a show as it was a performance.

Then there was the band themselves – seeing live music will never not be one of my favourite things, hearing the songs I listen to on repeat live will never fail to make me smile or cry or feel some sort of emotion and hearing old songs like Sleeping With The Light On, 3am and Air Hostess (flight attendant) live will always make my nostalgic heart happy, but hearing my first ever favourite band performing new songs from their 2016 album like New York, Night Driver and Kids With Computers was just as fun.

One thing I will say is that I wasn’t a massive fan of the set list – I felt like there was a lot of focus on the new songs, which makes sense but they sacrificed playing some of their biggest and most favourite songs, namely Thunderbirds Are Go and Meet You There to promote the newer songs was a bit sad. I understand that obviously they wanted to promote the new album but they could tell and everyone in the audience knew that the older songs were the real hits. The comparison I use is that when I go and see All Time Low, they substitute some of their older songs for newer songs when they release a new record but it doesn’t mean they’ll stop playing Weightless or finishing the show with Dear Maria – songs like Thunderbirds are some of Busted’s most famous songs and I was really excited for it, so it was a little disappointing that it wasn’t there.

I feel like 2016/2017 has been pretty significant for both Busted and myself – when I did daily-blogging in June last year, the very first post I planned was a review of the Pigs Can Fly tour and it’s the first post in the notebook I now use for planning all of my blog posts.

And I stand by that; I’ve been a Busted fan for so long and in less than a year I’ve seen them on two headline tours, I’ve seen them release new music for the first time since I was a kid, I’ve seen them play that new music alongside getting to meet them at an album launch signing, making a full package about the signing for uni, getting a signed album and having them see the tweet about my package – it’s been pretty monumental! 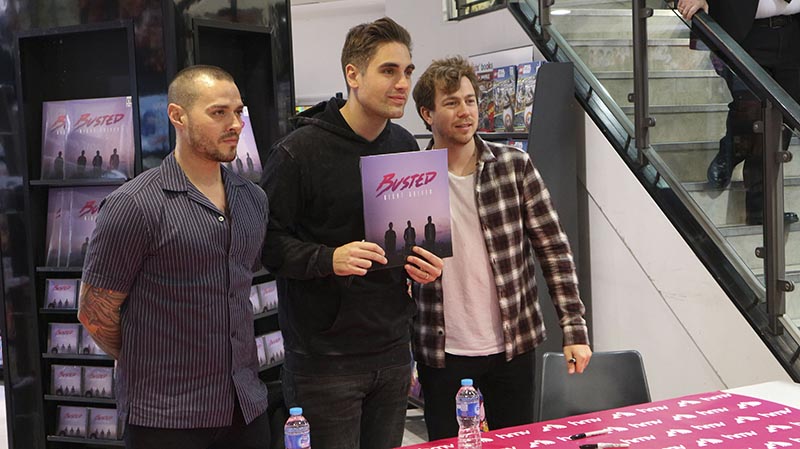 Busted have been a huge part of my life and they stand to be one of my favourite bands, so being able to see them reunite and release new music after so long makes me so happy.

I’ve got two All Time Low concerts coming up next month which I will probably write a review for, then in April I’m planning (hoping) to go to some more local gigs in Southampton, go and see bands I’ve not heard of and listen to new music – any recommendations?

If you liked this kind of review please do let me know in the comments, I’m still kind of experimenting with new content on my blog!