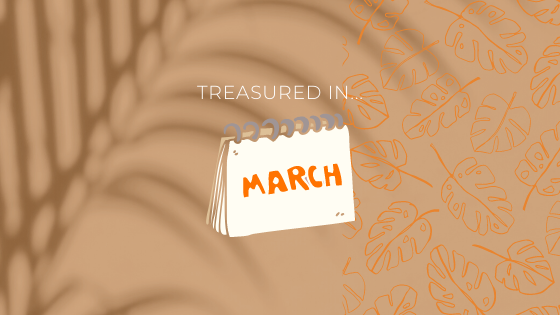 It’s that time of month where I’m baffled about how we’ve got to this time of month and it’s nearly the next month, with a bonus helping of oh my god we’re a quarter of the way through the year already and it doesn’t even feel like 2020 ever ended.

But taking the time to think and write about the things I liked in the last month makes me feel a bit brighter and it’s nice to talk about happy things so here are the things I Treasured In March!

Purchase – Other than putting the deposit down on a new rental house and having to get new glasses (which look the same but I can actually see out of them now), I actually haven’t bought a lot this month. I bought a box set of one of my new favourite book series ‘The Selection’ by Kiera Cass (which I’ll get to later) and I got some wool trackies from Asda that are glorious for working from home, but otherwise, I’ve actually been good at not spending this month and that is oddly satisfying.

Song – I’ve actually been listening to a lot of music this month, but nothing particularly new? I’ve made a few new discoveries and some new music has come out.

I’ve been watching a lot of Lottie Mednick on Twitch and she is currently designing an Avatar: The Last Airbender themed island in Animal Crossing New Horizon and she had Avatar music on in the background on one of her streams so… I started listening to Avatar music and ‘Kai’s Theme and Agne Kai‘ is a banger – if you’re a fan of soundtrack music, it’s fantastic and I can’t wait to listen to it whilst driving down a motorway in the summer.

All Time Low just released a new song called ‘Once in a Lifetime‘ and I’m obviously going to have it on loop for at least the next two months, it’s so catchy and I love it.

I’ve also been listening to the Georgia remix of ‘Hate Myself‘ by dodie, I just found ‘90s Kids‘ by Jax on tiktok and ‘weapon‘ and ‘that won’t save us‘ by Against The Current are also catchy af.

YouTube video – I’ve caught up on my watch later playlist! I give it approximately a week before it’s at 30 videos again but some of my favourites from the last month have been;

As I write this I’m reading my sixth book of the month, so March has been really good for reading but like I said earlier I bought ‘The Selection’ series having gotten the first book in a blind book gift my sister bought me from Etsy and demolishing it in the most ‘guilty pleasure’ way.

My first read was ‘Nick and Norah’s Infinite Playlist’ by Rachel Cohn and David Levithan and it was a beautiful little book about one night with a stranger in a beautiful city and reckless teenage abandon – it was lovely and I definitely need to watch the film now.

Then I read ‘The Elite’, ‘The One’, ‘The Heir’ and ‘The Crown’ by Kiera Cass to complete ‘The Selection’ series in about three weeks (very fast for me) – I don’t know how I can describe it because it wasn’t good, the fact the main character is called America Singer and she’s a musician irritated me from the off but the dystopian story with an old royalty feel (I’d just finished watching Bridgerton as well) all wrapped up in what is essentially a reality TV competition for the Prince’s hand in marriage and I gobbled it up. The third book in the series ended very abruptly and I did not enjoy the sequels about America’s daughter, Eadlyn, anywhere near as much but I still read the whole series in less than a month so I must have at least somewhat enjoyed it.

And I’m currently reading ‘In at The Deep End’ by Kate Davies and so far it’s a solid 3/5 – there’s a lot of sex in it, which usually I wouldn’t read as it’s not my thing, but the way the narrative voice is written just makes it all feel so normal? It’s not trying to be scandalous or seductive – it’s just a girl with real hormones and real feelings figuring out herself and her sexuality and a lot of it is really sweet. I’ve got about 50 pages left which I think I’ll finish tonight (on the last day of the month which is really satisfying!!) so if you want to see my full review it should be on my bookstagram sophiesreading in the next few days!

I think it was end of February that I watched Bridgerton but my viewing habits have been pretty standard this month – I’ve watched a lot of YouTube videos (as detailed above!), I watched Wandavision on Disney+ and I’ve watched the first two episodes of ‘The Falcon and the Winter Soldier’ which is brilliant so far.

My fiancé and I finished watching ‘Avatar: The Legend of Korra’ which was brilliant and I’m so excited about the announcement of a continuation of the universe. But we’re looking for a new series to binge – we’ve finished Korra, Falcon and Winter Soldier is weekly episodes, so whilst we figure out what show we want to watch next we’ve started a Marvel marathon – so far we’ve watched Captain America, Captain Marvel, Iron Man and Iron Man 2 (we’re watching in timeline order not release order!) and I’m thoroughly enjoying that actually!

I feel like I’ve mentioned this approximately three thousand times, but I’ve broken down everything we (I) need to plan for the wedding and put it into monthly tasks, this month was researching wedding insurance and booking the photographer and videographer and I did all of the things! We’re going to buy the wedding insurance once we’ve moved (because we’ve got to space out the funds!), the photographer and videographer are officially booked and we’ve booked a photobooth as well which is really exciting! It’s all starting to feel a little more real now.

I wasn’t sure how else to categorise it but I definitely couldn’t not mention it – I’ve started using Duolingo to learn Italian! I have always want to be better at languages but I’ve always struggled, so I thought I’d give it a go and I love how it’s laid out and I actually feel like I’m doing quite well! I’m not having a fluent conversation anytime soon but I can tell you that the insects are in the sugar and I don’t question why duolingo has come up with this sentence (i insetti sono nel zucchero! I think?).

As the world starts to reopen again, we’re packing to move into a new house and everything feels new and different, it’s definitely a little daunting and scary. I don’t really like change, but I’m excited about the new house and the new chapter it will bring.