The musical version of the popular children’s book Wind in the Willows by Kenneth Grahame had it’s World Premiere at Mayflower Theatre and I was lucky enough to be invited to see to the press showing with @sotonbloggers.

Being back at the theatre was like coming home – I’ve not seen a musical or a show or any form of play in so long and I got surprisingly emotional at parts of the show I really did not expect to get emotional about! I nearly cried at the finale, I was a mess but, anyway!

The whole show was absolutely mind blowing – my mum messaged me before I left and said I should take a notebook so I could jot things down, as a trainee journalist, and I told her I wouldn’t need it because I had my phone. Oh how I was wrong! There were so many amazing bits in the first half alone that I don’t think I possibly could have remembered them all when it got to the interval and I could write them down. 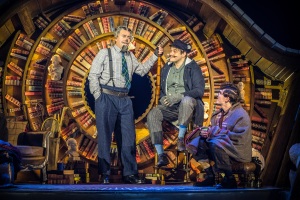 The vocals were flawless – the opening number, “Spring”, was an ensemble of incredible singers, wonderful actors and truly beautiful harmonies, it made me remember what I love about musical theatre. The dancing was so much fun (particularly the tap dancing horses and the Otter Ballerinas!), the sets were truly beautiful and intricately designed – the full size train carriage on the stage in the second half was so outstanding!

Toad was eccentric and jumped and leapt around the stage, the rabbits walked on their toes with their bottoms sticking out and the weasels, stokes and foxes were all a little bit creepy and sneaky – it was the phenomenal talent of the cast that brought these beautiful costumes to life.

The music was truly astonishing – I felt a few Les Miserables vibes but the music was so fully orchestral. It was beautiful and all of the songs felt like they could be real classics. They’re definitely songs that I could hear people singing years down the line, particularly “Messing About in a Boat”, “We’re Taking Over the Hall” and “A Friend is Still a Friend”. I’m keeping my eyes out for the soundtrack because I can’t wait to listen to those beautiful vocals all day long!

I also loved the variety of speaking accents, there were some beautiful intonations.

My favourite dance number was definitely the opening of the second act that accompanied “We’re Taking Over The Hall” because it was so much fun and it really grabbed everyone’s attention after the ice cream and drinks of the interval!

The whole show really reignited my love for theatre – I’ve not been to see a show in so long and when I got home, I went straight on the Mayflower website to have a look at what other shows are coming to Southampton (I’d love to go see the Beauty and the Beast ballet – last time I saw a ballet I was 8 and I fell asleep!).

In terms of cast and characters, Fra Fee was a wonderful and endearing Mole, David Birrell played a wise and father-like Badger and all the dancers were very, very talented. Obviously, have to commend the wonderful Rufus Hound who portrayed the equally annoying and entertaining Toad.

I was expecting Wind in the Willows to be a childish, almost-pantomime like show aimed at the younger members of the audience that would make me roll my eyes even if it was technically good but that really isn’t what it was. Yeah, it was definitely a more child friendly show as opposed to more adult shows like The Book of Mormon or Rent but when the audience laughed, the entire audience laughed. It was an amazing piece of theatre and a very nostalgic tale, enough to make me well up at the curtain call!

And it was very exciting to have ‘press’ written on the ticket, the complimentary drinks at the interval were wonderful.

This post wasn’t sponsored but the ticket was provided by Mayflower Theatre via @sotonbloggers. All photos belong to Mayflower theatre.