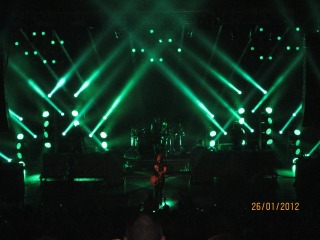 First off – I’m very aware that All Time Low have been around for far longer than 5 years, but that’s not what today’s post is about! 4 years ago today was the first time I saw my favourite band and that means I’ve been a fan for about six years, which is the longer time I’ve been a fan of anything really!

26th January 2012, Cambridge Corn Exchange, it was a school night. My friends and I got ready in the school toilets and it was the best concert I’d ever been to. We were up in the seated area of the circle and I remember I’d had a really shitty day and wasn’t feeling too optimistic as we were driving to Cambridge.

But it was incredible – I fell in love with the band even more, I got to see We Are The In Crowd and The Maine and a couple of my friends were seeing their first concert and it was incredible, I can’t imagine a better first-All Time Low concert.

And I’ve seen them again every year since – 2013 in Nottingham with my darling Louise, 2014 in Birmingham where we took the school minibus and 2015 at Wembley where they recorded their DVD (that hasn’t come out yet? As far as I’m aware?) and every year just gets better and better as I love them even more.

Obviously I’m going in 2016 too – London, February 11th! There’s also an opportunity to intern with Adam Elmakias, a music photographer who’s worked a lot with All Time Low. He has my dream job and I aspire to take photos like him – I really hope I get the chance to intern with him because it would be an absolute dream come true.

2012 Sophie with two of her best friends… in the school toilets! Look at those chubby cheeks and that selfie game.

I’d like to hope my photography skills have improved somewhat since 2012! Maybe if I get to intern with Adam Elmakias, I’ll get some more photos like this!!

I’m so pumped to see All Time Low again this year – they’ve been such a big part of my teenage life and here’s to seeing them again next year!