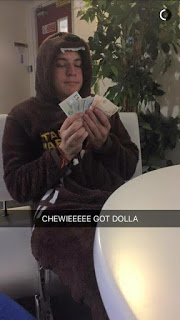 A few weeks ago, I wrote posts ‘Meet Lucas’ and ‘Meet Nikki’ (‘Meet Lucas’ was updated to ‘Meet Lucas, my boyfriend’, but never mind) and today, I finish the Squad introductions (unless another member is initiated into the Squad) with Nick!

Nick is a Swiss guy who lives in Shanghai that sounds American but gets very offended if you say he sounds American (even though I really like his accent) – he’s always happy and makes me laugh. He’s my best friend though that mostly came about so we could make Lucas jealous – he joins in when we’re taking the piss out of Lucas but he likes Doctor Who as much as we do and plays MarioKart with us.

Nick was initiated into the Squad on his first night with us – that’s how you know he’s special.

Nikki
Nick was initiated into the squad very quickly. We started out as a trio but after meeting Nick it was pretty obvious he was just as insane and into doctor who as we were, and so the foursome was made. He never fails to make me laugh with his antics and has one of those smiles that instantly cheers you up 😀 what can I say he is my other half.. literally his name is half my name. love you nicki noo!! :3

Lucas
Nick is the ultimate bae… no more needs to be said. This boy is my partner in murder, theft and occasional drug deals. In GTA that is… We are thinking of starting up a youtube channel together also and he is amazing. Everything about him is great and he puts up with a lot of shit from us so I’m proud of him for that ❤  Love ya Nick, u da real bae

Nick
ITS MEEEEEE!!!! HI as they say my back story is kinda complicated but it is very interesting and I am very happy with the experiances I have had. I really love the Squad and really appreciate how they accepted me so quickly. Its lots of fun hanging out with them and YE 😛 Now I need to go watch STAR WARS!!!!!!! YAYAYYAYA

Nick and Lucas are off to see the midnight premier of Star Wars so they were very excited and rushing off.

There you go – you’ve met Nick!