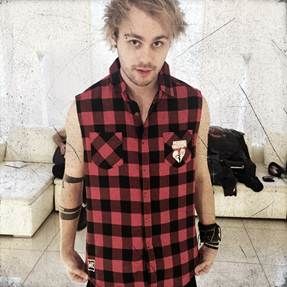 Today 5SOS announced the last of their self-designed merch pieces – Michael’s sleeveless shirt with the Safety Pin logo on the left breast pocket.

I think it’s great that the band are designing their own merch – it shows that they really care about the products that they’re putting on their store and they have a lot of control over what the merch looks like; it really represents them.

The issue I have is the price.

Michael’s shirt is priced at £40 – £40 for a sleeveless shirt! Ashton’s sleeveless hoodie is also £40 and Calum’s sweater is £28, almost twice as much as I’m personally prepared to pay for any sweater, let alone a 5SOS one. If I remember correctly, the snap back Luke designed (that’s no longer on the store) was £25.

I know the band can afford to make merch that expensive because they have a lot of fans that can and will pay that much for anything they’ve had any part in but a lot of fans really can’t afford that. I really like all of the designs but I don’t have a lot of money at all (I’m a student, duh) and I don’t think it’s fair that this merch isn’t reasonably priced at all – it’s priced for profit, which makes everything about money which doesn’t sit right with me.

I know the band probably get very little say in how much their merch is priced at, but as a band that have been fans – that have stood in the crowds at shows and hoped that one day they can be where their heroes were on that stage and to have got there, I would have thought that perhaps they’d see these prices and do something about it.

However I’m not that naive – I know they don’t have that control; their management and marketing department and all sorts of people have probably don’t lots of calculations as to how much item costs to make and how much people are likely to pay. What worries me (just a little bit, I mean I don’t care that much) is that if the sales figures are really good, then they’ll continue to up the prices because they know people will pay them. One day the sweaters and the sleeveless items will be hundreds of pounds just because one of the boys designed it or had their picture taken in it.

(minor edit: just want to add, this isn’t me slating 5 Seconds of Summer – I still love them and I’ve had their new album on repeat, I wouldn’t care about merch prices so much if I didn’t love them – just wanted to clarify they’re still my second favourite band, like they’ve always been)