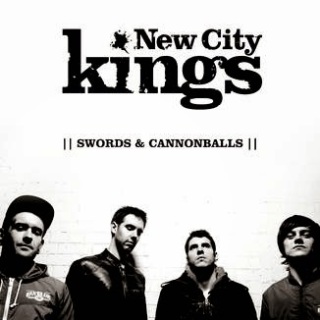 I’ve not reviewed a band before – let’s give it a go!

New City Kings were the second of two opening acts for McBusted when I saw them in Nottingham a couple of weeks ago. As we won tickets to the OMFG zone we were super close and as we were basically the only ones dancing in the OMFG zone, we got their attention and they threw us a couple of guitar picks (that other people stole, my pick collection consists only of 5SOS picks I got for my birthday and the McBusted picks I bought at the merch stand).

I fell in love with them instantly – first aesthetically, they were all dressed fantastically, I was jealous of their wardrobe, secondly they are pretty much my favourite genre of music – light enough to be pop-ish, guitar-y enough to be rocky and a little bit of punk for good measure.

Their stage performance was incredible – for opening acts, especially at concerts like McBusted, the audience aren’t always too pumped (other than myself and my friends, apparently – everyone in the OMFG zone thought we were mental) but they gave it everything – they made the stage their own, commanding it and getting people singing riffs that they probably hadn’t heard before.

Since then, I’ve been watching the videos on their YouTube channel (vastly under subscribed, check it out here) and they uploaded an acoustic cover of FourFive Seconds and it’s amazing – they’re so musical; very talented bunch.

I’ve also been listening to their music on Spotify – I’ve fallen in love, I’m going to need to start learning some lyrics asap! I want to see them in concert again but unfortunately I have zero money.

Hey, New City Kings, if you want to hook me up with some merch I’ll give you free promo. Concert ticket give away? Loving it – is this too cheeky? Ah, if you don’t ask you won’t get hey?

If you like 5 Seconds of Summer, All Time Low, As It Is, The Summer Set or McBusted you’ll like New City Kings. You don’t have to like all of the above, but that’s a summary of my favourite genre of music. If you’re interested in my music, go check out my Spotify profile – all my best playlists are there.