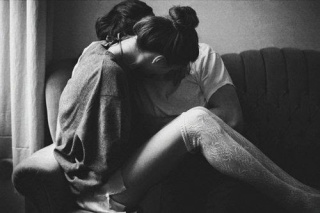 I’m feeling very tired and uninspired today and I realised it’s been ages since I did anything creative writing-y ish for a while, so I searched around for some inspirations and today’s post is going to be one of those angsty couple-y things, my favourite.

I’d been home for a few days sick – I’d been sniffling and coughing and mostly curled up under a blanket on the couch until he came home and made dinner and brushed my hair out of my eyes and babies me for a bit.

Work had told me to take the whole week off, so when I was starting to feel a bit better and tidying the house while he wasn’t home, I found some things that he probably didn’t want me to.

There was always a couple of boxes in the back of our wardrobe that he said didn’t need unpacked – they didn’t have anything written on them but whenever I asked he dismissed it. This was the opportunity to find out what was inside.

They were memory boxes, they were full of photo albums and scrapbooks and stupid little trinkets and things that, to me, had no relevance. I picked up one of the scrapbooks that looked the biggest and most used, sitting on the edge of our bed and opening it up.

The first page was a note in his handwriting – ‘I met this girl on holiday and she was the cutest person on the whole god damn beach. We met up every night and I kissed her under the pier in the starlight like we were in a Nicholas Sparks novel. She thought it would be cute if we wrote letters to each other and two years later, I put them all together.’

He’d written an introduction to a book full of our love letters. He’d photocopied his replies to my letters and stuck two years worth of letters into the book. After those two years we’d moved in together and thought writing letters to our own address was kind of lame.

I spent hours sniffing and crying and laughing and falling more in love with this lame as boy that I’d kissed under a pier three years ago.

When he got home I was crying again and he panicked and I just hugged him and kissed him and tried to find the words to explain that I’d spent literally hours looking through his memory boxes and invading something he’d never given me permission to go through.

He didn’t care – he’d forgotten most of it, he cried with me and we watched ‘The Notebook’ with take-out pizza and I felt like our relationship had reached a new level, but I was also aware of how pretentious and stupid that sounded.

I didn’t save all of our letters, I never thought about making scrapbooks of our relationship like this. I’d almost forgotten about that kiss under the pier.

I don’t know how I got so lucky.

I’m a sucker for a bit of romantic writing and I like exploring relationships like this because I’m actually a sappy little so-and-so! Leave a comment if you liked it!