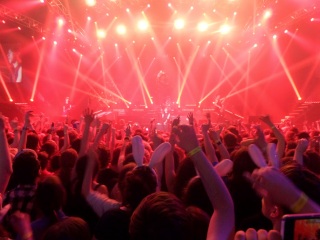 I’ve mentioned it in at least a hundred blog posts about this (even with my grand total of 89 blog posts) but I went to see All Time Low in their ‘One Night In London’ show at Wembley arena on Friday and yesterday, in the quickest blog post I’ve ever written, I said I’d write a proper review today.

Guess who’s sticking to their word?

It’s me. Noodle points to Sophie.

I have a pot noodle staring at me. Sorry.

On to the concert! 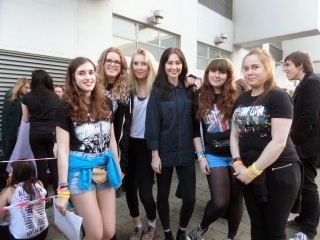 Five of the best people ever. 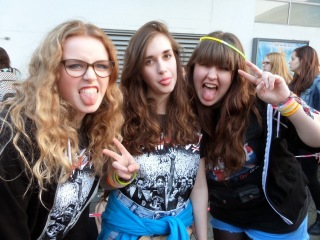 The three of us have seen All Time Low together four times!

We’ve been planning this journey for a long time – six of us getting from our home town, to London, Wembley and back was a big ask and we expect it to be a nightmare but it couldn’t have gone more smoothly. We were sensible, we asked for help on a couple of occasions and when we thought getting the underground back to Kings Cross would be absolutely manic, we took a brisk stroll from the arena to the station and got on the train and sat on the floor for twenty minutes until we got back to Kings Cross.

We even got a train half an hour earlier than the one we’d expected to get. We were better than we expected.

But after our easier-than-expected journey in, we joined the queue an hour before doors opened – there were people that had camped out the night before and we weren’t expecting to get too close to be honest, because even though we were definitely in the first half of the queue we really hadn’t been there for that long. When we got in to the arena and were standing so close to people that my anxiety was sky rocketing (but I didn’t have a panic attack all night, I’m so proud) but some of the girls we were stood with had been queuing for six to eight hours – we’d been there for one! We were so lucky. 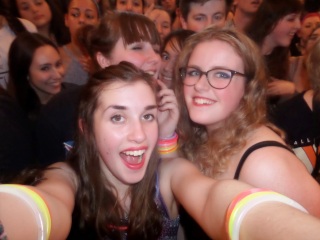 I’m somewhat in love with this photo.

I’ve accidentally cut off Tilly’s face, but I love this one too.

It was brilliant because every time anyone took a selfie, anyone who noticed would pose too – my favourite part of the above photo is all the people that I have never met and didn’t talk to posing for the picture and I think that summarises people at concerts; we’re all there for the same reason and it would have been like having 12,000 instant friends if they weren’t sat all over an arena.

I tried to get some arty shots of the lights and peoples arms in the air but the little camera I took wasn’t fantastic and my arms were aching so much after two support acts and partying like my life depended on it that the photos aren’t great but in a pretentious-artsy way, I still like them because it shows movement – no one stands still at a concert unless it’s a rubbish concert.

And this is where I start talking about All Time Low themselves – I’ve seen them three times before this and I can say not only is this the best All Time Low concert I’ve ever been too, but the best concert I’ve ever been to – full stop. It was phenomenal – Alex’s vocals were on point, I’ve never seen Jack play so well, Zack’s harmonies were beautiful and Rian’s drumming, well, there are no words for Rian’s drumming because he is just astounding.

My favourite song that they played was Kids In The Dark without a shadow of a doubt, it was incredible I’ve never had such a party vibe from a concert I’ve been to before. I can’t even find the words because I’m just so blown away by how incredible that show was.

And I get to relive it all when the DVD comes out, I’m so pumped.