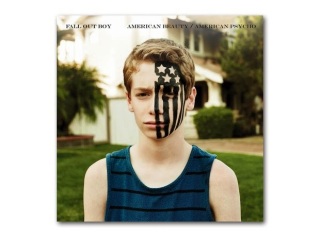 I had to borrow Sprinkle of Glitter’s greeting because she liked my post on tumblr (link) promoting the post I wrote on here about how fabulous she is yesterday (link) and it’s made me really happy.

But for the sake of varied content, I won’t be writing another blog post on Louise today (however much I could).

From the title you know what I’m going to write about Fall Out Boy’s newly released album American Beauty / American Psycho, but first I wanted to say that my three most popular blog posts of this project (and of all time, actually) are the post about tattoos I want, the Rocky Road recipe and the first short story I wrote. From this I can’t really gauge what people want to read, so I’ll continue to write a bit of everything till maybe something settles. I don’t know, if there’s something you particularly enjoy reading, do leave me a comment and I’ll write more of that!

And now on to a song by song review of American Beauty / American Psycho – enjoy!

This song was released as part of the preorder and I really love it – it’s bass-y and the riff in the background is really catchy. The lyrics are poignant and it’s got that essential Fall Out Boy vibe that kicks you in the gut with guitars and imagery in the way that the first song on an album should. Comparing it to the first track on their last album Save Rock and Roll, I don’t think Irresistible is as good as the Phoenix but this might be because I’ve been listening to it for a couple of weeks and I already know it. That’s not to say I don’t like it – it’s one of my favourite songs on the album and is definitely the right choice to open American Beauty / American Psycho.

The title song is another one that was already released and has been playing for a while now. I’ve found that people are uncertain about this song – it’s different, I’d say it’s lighter and rockier than Centuries and My Songs Know What You Did In The Dark but that’s not to say it’s not as good. I had to listen to it for a few days before I really, kind of, got it – it is rockier and it is different but change has to be embraced otherwise a band will never progress. Personally I don’t think this song should have been the one that named the album but in the name of progression, it does make it the most natural choice. Again – I do like the song; it’s really catchy and the music video is really good too, but that might be because there’s a ballerina and I’m a sucker for a good dance video.

I love Centuries. I have adored Centuries ever since it was played in September and I can’t even explain how much I love it – the vocals, the instruments, the way it makes me want to start a revolution and join a street dance group at the same time – I’m so in love with this song that I can’t even consider trying to put it into words. It’s musical genius.

I really, really like this song – Fall Out Boy have a lot of fans that are in their mid- to late-teens and a lot of them turn to music in times when they don’t have much else to turn to and to get the kind of understanding that this song provides just is just amazing to listen to. I think it’s the closest thing this album gets to a ballad and I like that even then it’s not sad and emotional. ‘It’s our time now if you want it to be’ – it’s empowering and motivational and and lives up to the standard of following the titular track. With another underlying catchy riff in what sounds like whistling, Fall Out Boy are onto another winner. Patrick Stump ends the song with some amazing riffs and then everything fades so only the riff can be heard, giving the song a poignant but somewhat childish conclusion.

I mean, I’m pretty biased because I think this album is amazing but I’m trying to write about it from a neutral perspective.

This song has an amazing piano line, an amazing bass riff and some incredible harmonies and that’s only in the first 20 seconds. When the album was leaked, this is the song everyone went mental for. At first I wasn’t too sure – I didn’t want to follow the hype but since listening to the album a few times I can decide that the song has all this hype for a reason – it’s one of the best on the album. It has so many layers and even listening to it now I’m finding new things to appreciate, especially in Stump’s vocal line. I’ve talked about lyrics a lot whenever I’m writing about music but these ones are as inspiring as The Kids Aren’t Alright – ‘I can move mountains I can work a miracle’.

Uma Thurman bleeds straight into Jet Pack Blues, another perhaps slower song with a strong piano line that talks about standing in the rain singing ‘Baby come home’. The drums in this track are particularly impressive – they’re subtle but bring so much of the mood to the track. It’s so poignant that I got lost listening to it rather than writing about it!

When I saw the title of this song I knew I was going to like it. I can’t describe the sound that opens and sustains the song – like a growling sung line – but it pulls you in and gives me this image of the band playing in a grungy underground room with floodlights back lighting them. It’s something dark and dangerous and I can’t explain why – this is one of my favourite songs on the album and I love the guitar layers. I’d love to see this played live.

The introduction of this song is really powerful – the layers are brought in gradually with hints of vocals before it all strikes with the chorus. The harmonies on this album are really incredible but the moments without harmonies and more minimalist approaches to the music in the bridge of Fourth of July before the chorus hits again really catches the listeners attention, making them listen. There are so many layers in all of these tracks that make them so different – each one has an underlying riff that takes a different form and they just bring something haunting to each song. The song builds up and up with the last chorus and ends with an almighty crash that leaves your heart beating that little bit faster.

Favourite Record seems contrastingly quite pop-y next to Fourth of July (probably intentional) but it’s very mellow and chilled. The lyrics here are actually really romantic but you have to listen quite closely to understand that, but I like that because it’s likely that someone else would interpret it completely different to the way I have. ‘You were the song stuck in my head … Play it again and again and again’ – some of the lyrics seem really romantic whilst others are more like they’re trapped. The ending is stripped back and somewhat electric and it’s something different again, it’s amazing.

This song is probably my favourite. It was released as the song in new Disney ‘Big Hero 6’ and I didn’t want to listen to it until the album came out but I love it so much – it’s got that motivational vibe but it’s got heavy guitars and moments of minimalist poignancy and the classic soul riffs from Patrick Stump again. I adore this song a lot. I’m yet to see Big Hero 6 (I’m desperate to see YouTube’s danisnotonfire and AmazingPhil make their movie debut!) but from what my sister’s told me about it and trailers I’ve seen, the song fits it perfectly.

This song has so many guitars and I love it. The message in this song seems to me to be a kind of brutal romance – two people, vulnerable and open as skeletons but drawn to each other as twins? Maybe I’ve got it entirely wrong but it seems to be sort of desperately romantic. There are harmonies, riffs and drums everywhere and the way it slows down and doesn’t end with a crash of drums and guitars, makes it the perfect conclusion to American Beauty / American Psycho.

Overall response:
Not as good as Save Rock and Roll, but still an absolutely astounding album.

Obviously I can’t speak on behalf of the entirety of Fall Out Boy listeners, so all these opinions are mine.

I feel like I’ve said ‘layers’, ‘lyrics’ and ‘poignant’ way too much in this review. Did you like this style of blog post? I bought a few more albums with my Christmas money and I’ll review them in the same way if you like that!