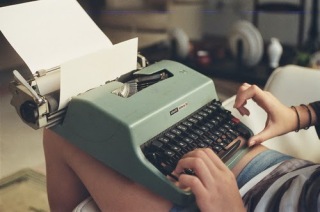 Last week I wrote a short story from a prompt website I found and it was one of my most popular posts to date! So whilst trying to find a decent prompt website (and failing), I found a Random First Line Generator. I hope you enjoy!

The old house, with it’s wildly overgrown garden was silent; secretive. That’s what I liked about it – the hints of times now past and lives once lived that I could fill in the blanks to in whatever way I desired.

That’s what I tried to capture when I was taking photos – every person that locked at my photos would notice something different and bring something new to these stories that I was crafting.

This house particularly was one of my favourite places – in it’s day, it must have been beautiful. The garden has these stunningly ornate sculptures and statues were now completely overridden with vines and and branches. The trees grew to impressive heights – some of them had initials and dates carved from almost a century ago and I found something bitterly romantic about it.

I like spending my time in old places, particularly abandoned ones because although there are layers of dust and proof that no one has lived there for years and may not again, I always think there’s an element of life – as if it’s on pause and one day someone might come back to brush away to cobwebs.

I had an innocent view of all these houses I visited until that one where the dust was thin and the spider’s had barely had time to settle in. I was alone – as I always was when I was taking photos – then I heard a rustling and a door squeaking as it was tentatively pushed open.

A little girl – no more than ten – wearing a grey dress that looked like it had the same layer of dust as everything else in the house. Her dirty blonde hair hung limp at her shoulders. Her hand was clenched but I couldn’t see what she held.

“You okay, kid?” I asked dubiously – her eyes were so empty; not scared or angry or inquisitive but completely blank.

“You’re not meant to be here yet.”

Then she was in front of me, her clenched hand opened and a fob watch hung off a long chain latched onto her finger. After scanning her expression and trying to understand the situation, I dared to touch the watch. Her hand snapped shut around the chain and together we were attacked by a fierce wind, threatening to blow me off my feet. The dust seemed to fly up around us, trapping itself in my every breath and settling in my lungs.

She let go and the room had a more intense layer of dust. I was covered in it to.

I dropped the watch and run away – I was terrified, I had no idea what was going on.

When I got home, I was welcomed into my boyfriend’s arms while he burst into tears. “It’s been six years, we all thought you were dead. We thought you’d been kidnapped.”

He had a new girlfriend and he’d left our house untouched in memory of what I’d loved taking photos of.

I found the watch in my coat pocket.

Well, this is interesting.

I’ve never really written anything in this style before and I don’t know if the whole supernatural thing really worked but feedback would be greatly appreciated in the comments!